200 Plus years combined appraisal knowledge for your car and vehicle appraisal needs. Automobile diminished value and total loss is our strength. We will help you find the value of your property.

Mercedes‑Benz claims to have become the world’s first automotive company to bring SAE Level 3 conditionally automated driving to the US, with Nevada being the first state to confirm the compliance of the system with state regulations.

This significant milestone sets the ground-breaking Mercedes‑Benz “Drive Pilot” system apart as the first and only SAE Level 3 system in a standard-production vehicle authorized for use on US public freeways.

Complying with the requirements of Nevada Chapter 482A for Autonomous Vehicles, Drive Pilot will allow the driver to hand over the dynamic driving task to the vehicle under certain conditions.

Mercedes‑Benz has the ambition to continue to expand to California later this year with the certification documents already filed with state authorities.

Drive Pilot will be available in the US market as an option for model year 2024 Mercedes‑Benz S-Class and EQS Sedan models, with the first cars delivered to customers in the second half of 2023.

Markus Schäfer, chief technology officer, Mercedes‑Benz Group, says: “In the modern world, time is one of the most precious commodities, and giving back time to our customers is a core element in our strategy to build the world’s most desirable cars.

“Our Drive Pilot takes a major step forward in achieving that, and places us at the very forefront of innovation in the crucially important field of automated driving.

“Drive Pilot demonstrates once more that our pioneering spirit is part of our DNA. Certification in Nevada marks the start of its international rollout and, with it, the dawning of a new era.”

On suitable freeway sections and where there is high traffic density, Drive Pilot can offer to take over the dynamic driving task, up to the speed of 40 mph.

The control buttons needed for this are located in the steering wheel rim, on the left and right above the thumb recesses. Once conditions are suitable, the system indicates availability on the control buttons.

When the driver activates Drive Pilot, the system controls the speed and distance, and effortlessly guides the vehicle within its lane. The route profile, events occurring on the route and traffic signs are correspondingly taken into consideration.

The system also reacts to unexpected traffic situations and handles them independently. For example, by evasive maneuvers within the lane or by braking maneuvers.

Dimitris Psillakis, president and CEO of MBUSA, says: “An unwavering commitment to innovation has consistently guided Mercedes‑Benz from the very beginning.

“It is a very proud moment for everyone to continue this leadership and celebrate this monumental achievement as the first automotive company to be certified for Level 3 conditionally automated driving in the US market.”

The top priority for Mercedes‑Benz when introducing such a system is safety, which includes high demands on operational reliability. Drive Pilot builds on the surround sensors of the Driving Assistance Package and comprises additional sensors that Mercedes‑Benz considers indispensable for safe conditionally automated driving.

These include LiDAR, as well as a camera in the rear window and microphones for detecting emergency vehicles, as well as a road wetness sensor in the wheel well.

A vehicle equipped with the optional Drive Pilot system also has redundant steering and braking actuators and a redundant on-board electrical system, so that it remains maneuverable even if one of these systems fails and a safe handover to the driver can be ensured.

If the driver fails to take back control even after increasingly urgent prompting and expiration of the takeover time (e.g., due to a severe health problem), the system brakes the vehicle to a standstill in a controlled manner while engaging the hazard warning lights.

Once the vehicle has come to a standstill, the Mercedes‑Benz emergency call system is activated and the doors are unlocked to make the interior accessible for first responders.

The exact location of a Mercedes‑Benz equipped with Drive Pilot is determined using a high-precision positioning system that is much more powerful than conventional GPS systems.

In addition to the anonymised data collected by LiDAR, camera, radar and ultrasound sensors, a digital HD map provides a three-dimensional image of the road and the surroundings with information on road geometry, route characteristics, traffic signs and special traffic events (e.g. accidents or road works). This is made available and updated via a backend connection.

This high-precision map differs from maps for navigation devices by, among other things, its higher accuracy in the centimetre rather than metre range and its detailed junction and route model.

The map data is stored in backend data centres and updated constantly. Each vehicle also stores an image of this map information on board, constantly compares it with the backend data and updates the local dataset as required.

All of this enables stable and accurate positioning through a representation of the surroundings that is independent of factors such as shadows or dirty sensors.

A powerful chipset inside the central control unit provides the necessary sophisticated software functions for conditionally automated driving while important algorithms are calculated redundantly within the framework of a modern security architecture.

During the conditionally automated journey, Drive Pilot allows the driver to take their mind off the traffic and focus on certain secondary activities. When Drive Pilot is active, applications can be enabled on the vehicle’s integrated central display that are otherwise blocked while driving.

Initially introduced in Germany in May 2022, the highly sophisticated Mercedes‑Benz Drive Pilot system was the first SAE Level 3 system in the world to meet the demanding legal requirements of UN‑R157.

Police are investigating the torching of a car and house in the village of Turmussya near the West Bank settlement of Shilo, but have not yet arrested any suspects. Three suspected figures were captured at the site in CCTV footage.

Also on Sunday night, six cars were torched in the village of Majdal Bani Fadil, allegedly by Israelis, who are also suspected of hurling stones at an ambulance. A group of settlers was staying in the nearby evacuated outpost of Or Haim in an attempt to reestablish it, but they left the plance on Saturday evening.

Palestinian media also reported that a vegetable stand was damaged in the Jordan valley, but Israeli security sources said they were not familiar with the case.

Police are investigating the incident in Turmussya as a potential hate crime after seven people were killed in a shooting attack outside a synagogue in East Jerusalem on Friday evening, followed by another shooting in Jerusalem by a 13-year-old Palestinian who wounded two people.

The recent attacks underscore a cycle of violence in Israel and the Palestinian territories that has accelerated after Israeli forces killed ten Palestinians in clashes that ensued a raid in Jenin on Thursday.

Following the deadly raid, in which Israeli forces attempted to arrest suspects in planning terror attacks, the Palestinian Authority announced it was halting its security coordination with Israel.

I’ve mentioned this before, and now it’s headline news. Pretty simple to see that people who bought Tesla never should have, and are lucky it didn’t kill them. When I got the second Tesla, I got Full Self-Driving and was very disappointed. I didn’t trust it, because I had scares several times when I was … END_OF_DOCUMENT_TOKEN_TO_BE_REPLACED

*** This is a Security Bloggers Network syndicated blog from flyingpenguin authored by Davi Ottenheimer. Read the original post at: https://www.flyingpenguin.com/?p=44947

Sonic Automotive, Inc. (NYSE:SAH - Get Rating) has been assigned an average rating of "Hold" from the six ratings firms that are currently covering the stock, MarketBeat Ratings reports. Two investment analysts have rated the stock with a sell rating, two have issued a hold rating and two have assigned a buy rating to the company. The average 1-year target price among brokers that have covered the stock in the last year is $51.67.

→ The Next Big Crisis Is Here (From Porter & Company)

The Next Big Crisis Is Here

You just can’t see it yet because it’s NOT a banking, financial, or economic crisis… it’s far worse and threatens every dollar in your retirement account.

Sonic Automotive, Inc operates as a automotive retailer. Its services include sales of both new and used cars and light trucks, sales of replacement parts and performance of vehicle maintenance, warranty, paint and repair services and arrangement of extended service contracts, financing, insurance, vehicle protection products and other aftermarket products for automotive customers. 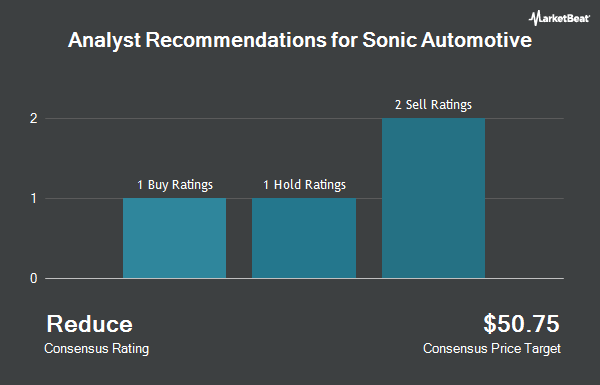 This instant news alert was generated by narrative science technology and financial data from MarketBeat in order to provide readers with the fastest and most accurate reporting. This story was reviewed by MarketBeat's editorial team prior to publication. Please send any questions or comments about this story to This email address is being protected from spambots. You need JavaScript enabled to view it..

Before you consider Sonic Automotive, you'll want to hear this.

MarketBeat keeps track of Wall Street's top-rated and best performing research analysts and the stocks they recommend to their clients on a daily basis. MarketBeat has identified the five stocks that top analysts are quietly whispering to their clients to buy now before the broader market catches on... and Sonic Automotive wasn't on the list.

While Sonic Automotive currently has a "Hold" rating among analysts, top-rated analysts believe these five stocks are better buys.

Supply constraints that have suppressed vehicle inventories for two years appear to be easing, meaning dealerships soon may have more vehicles on the ground. More choices will mean heightened competition, so some dealerships introducing newer employees to the fundamentals of selling.